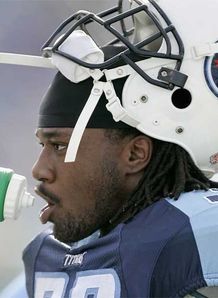 Trying to change his image, “Pacman” no longer wants to be known as such. Yes, Adam Jones, the new Cowboys CB who is known for his issues off the field more than his play on at points, is telling the media not to call him “Pacman” anymore. “There’s really just a lot of negativity behind it,” Jones said. “It’s just time for a change, man. I’m doing everything to make sure that I’m all right as a person, mentally and emotionally.”

Jones was getting called “Pacman Jones” by kids during a basketball camp over the weekend that was hosted by Mavs forward Brandon Bass. After doing a speech, Jones signed autographs just by his given name, and not his nickname of “Pacman.” “My mom is going to call me â€˜Pacman.’ That is what it is. I can’t change that,” Jones said. “I’m not saying that my teammates won’t call me â€˜Pacman’ on the field. But for the most part, I want to be Adam or Mr. Jones.”

At this point, it’s not even for sure that Jones is going to be able to take the field for Dallas in 2008, as he still needs to get cleared by commissioner Roger Goodell to play this year in regular season games. He is being allowed to practice and play in preseason games. Reports say a decision on Jones may not come till the week before the regular season opener for the Cowboys in Dallas September 7th.