« Falcons Cut Former 2nd Round Pick Williams
Is Ryan Going to be Ready to be the Falcons Starter From Day One? »

Walker Out of the Hospital Today? Rumors Spread on What Led to Robbery 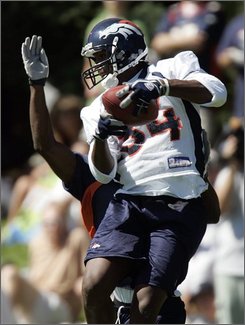 Javon Walker could be out of the hospital today, just one day after he was found unconscious on a Las Vegas street after a night of partying on the strip. Police say he was beaten and robbed, and left on the street in Vegas. Police say that Walker was robbed of a large amount of cash as well as jewelry.

Police say that Walker was at the nightclub Tryst, at the Wynn Las Vegas resort, and left about 3:30am. There were reports of a champagne spraying at the party that exceeded $15,000. One site even stated that Walker and now retired boxer Floyd Mayweather got into a contest about the spraying, and rumored it was Mayweather’s entourage that beat up Walker. Again, totally unfounded reports at this point.

The Raiders wide out suffered “significant injuries” and as of this moment other than having a broken orbital bone, there is no word as to what other injuries he may have suffered. Walker signed a six-year, $55 million deal with the Raiders after being released by the Denver Broncos in February.