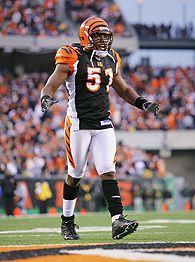 Former Bengals linebacker Odell Thurman is reportedly facing an indefinite suspension from the NFL.  According to SI.com, Thurman, who was suspended for the past two seasons for violating the league’s substance policy, violated the policy again.  Thurman was reinstated by the league in April, but was released by the Bengals last month after he failed to attend offseason workouts.  Thurman racked up 148 tackles, four forced fumbles and five interceptions in 2005.

Since then his dumb off the field decisions have cost him dearly.  The Bengals decided two weeks ago they wanted nothing to do with him anymore, and could have possibly seen the writing on the wall that another suspension was coming.  Bottom line Thurman will go down as having a wasted career after he started out fast as an up and coming player in the league.