Johnson Says He’ll Be Back Soon with the Bengals 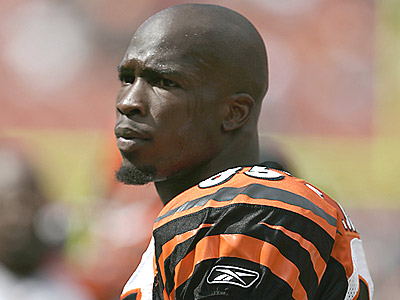 Chad Johnson must have had a quick change of heart.  Or someone must of told him what it would cost him to miss mandatory minicamps, training camps and then games.  Why else would the mouthy, yet talented wide out suddenly declare that he’ll be coming back to the Bengals, maybe as early as next week?  Johnson’s comments came out today that he made back on May 23rd while acting as the editor-in-chief of ESPN The Magazine’s second annual Revenge of the Jocks issue.

“Am I coming back? Of course I am,” C.J. said.  “I told my coaches I’m going to California to act, but the truth is I may come back to the Bengals as early as June, I may be crazy but I’m not stupid.”

Johnson has been vocal from early on after the season ended that he did not want to play in the Queen City, and demanded that the team trade him.  Instead, now it looks that both sides are going to have to find a way to co-exist, and he and coach Marvin Lewis might as well kiss and makeup.

“If we want to be like Indy and New England, we have to pay and bring in some difference-makers on defense,” Johnson said. “Our offense is fine. But if they’re fussing about paying a guy like me, a guy among the best in the league, you know damn well the Bengals aren’t gonna supply the defense with what it needs. So I just said, ‘If we aren’t gonna do what we need to make us win — can I please leave?’ It’s simple. I just told ’em: ‘If y’all won’t change, then I have to.'”

No doubt that if Johson can do what he does best – make plays and score touchdowns, the Bengals will be a much better team, and have a much better chance on having a shot at being a contender again in the AFC North.  If he comes in and causes issues, the team is going to have to make a hard choice if he’s worth the trouble.

So far, that choice has been yes, he’s worth it.  If he comes in and does his job, the Bengals will be better off.  As for Johnson – “It’s the reinvention of Ocho Cinco,” he says. “I’m dead serious. People need to take me as I am because I just don’t give a [expletive] anymore. That’s how I’d sum up my attitude for the next season.”