Can the Chiefs Trust the QB Spot to Croyle? 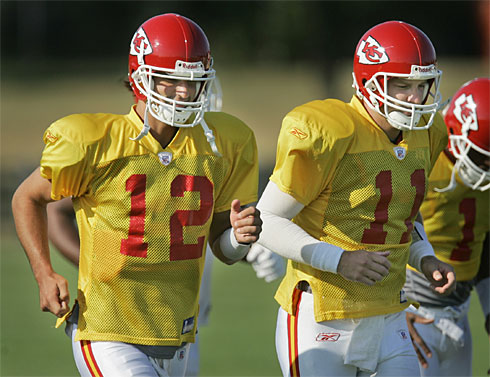 The Kansas City Chiefs enter the 2008 season as basically an afterthought in the AFC West.  They have a young team that is coming off a tough year in which they went 4-12.  While players like last year’s #1 WR Dwayne Bowe and this years two #1 picks – Brandon Albert and Glenn Dorsey give the team hope for the future, hope for now seems few and far between.

This seasons success, or possible lack of it, will fall squarely on the shoulders of third-year QB Brodie Croyle.  The former third-round pick is being counted on to do something that he could not do last season – win the starting QB job in training camp.  This year Croyle once again is being touted as the guy that will start under center on opening day – this despite the fact he has not won a game yet in the league.

Last season the Chiefs had to pull the plug on Croyle late in training camp and hand the starting job to Damon Huard.  When Croyle did get a chance to play, he was blah at best, throwing for 1227 yards on 127-for-224 passing, with six touchdowns and six interceptions.  His best game was a 13-10 loss to the Colts in week 11 when he was 19-for-27 for 169 yards.

“He feels good that he’s the guy,” coach Herm Edwards says of Croyle. “His whole deal is that he has to get through a whole season of playing quarterback without any nicks or bumps or bruises. He’s going to have his ups and downs; they all do. But I think he learned a lot last year having to play.  Now we’ve got to surround him with some players where he has that ability to find out if he can do it.”

Those players will be few and far between, with RB Larry Johnson and Bowe maybe being the only saving graces on offenses for the Chiefs this season.  The question now for Edwards and the Chiefs – can Croyle finally take what he has felt was rightfully his the last two years? Or will it be another long season of an offensive drought in KC with a QB that can’t get the job done?