« Offseason Overview: Growing Pains Not Over for the Bears
NFL OTA News – Read Once, Know All » 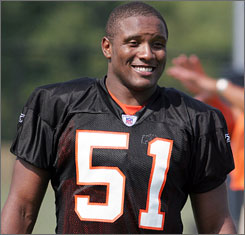 In a move that comes as a shock considering how the Bengals need help on defense, today they released troubled linebacker Odell Thurman. The move is a total surprise to Thurman and his agent, who spoke out about it in the Cincy Enquirer. “The support he got from the fans, from the people of Cincinnati, from Marvin Lewis and (team president) Mike Brown, this comes as a surprise,” Lawson told the paper.

It may be that the Bengals simply did not want to invest the time and energy into Thurman, and also the questions about bringing a troubled player who had been suspended for the past two seasons. Instead they will put their eggs in the basket of draft pick Keith Rivers, who they used their first round pick on last month.

The Bengals did release a statement on the release of Thurman: “The NFL provided Odell the opportunity to earn his way back onto our team,” Bengals coach Marvin Lewis said in a statement. “But we have not seen the right steps taken by him. With our offseason work in progress and new talent added at our linebacker position, we’ve determined it’s best to keep moving in a direction that does not include Odell.”

Thurman led the Bengals with 148 tackles during his rookie season in 2005. He also led all rookies with five interceptions and forced four fumbles.