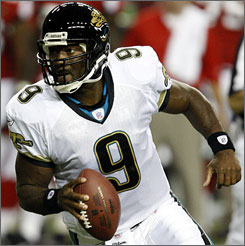 â€¢ CB Terry Cousin is looking for long-term deal that may not match what the Jaguars want. He may be looking for a four- or five-year year deal which the Jaguars may not be willing to pay someone who will be 33 in April and was nothing more than a nickel back a year ago.

â€¢ DT Grady Jackson was brought in to fill a need when Marcus Stroud was suspended for four games. Jackson will probably be back, and is more likely with Marcus Stroud having been traded.

â€¢ OT Stockar McDougle showed a lot of promise and the coaching staff liked him, but injuries have held him back. It would be a surprise if the Jaguars kept him around another season.

â€¢ CB Chris Roberson (not tendered as RFA) spent the 2007 season on injured reserve after being waived injured on July 27.

The Jaguars seem to be a team poised to take another step in the AFC, but the problem remains they have the Colts and Patriots in their way. Indy has owned the AFC South the past few seasons, always forcing the Jags to be on the road in the playoffs. The Pats last season took a few shots from the Jags early, but recovered in their AFC Divisional Playoff matchup in time to recover for a victory to move on. So this offseason, it was more about re-tooling then re-shaping the roster for the Jags, as they made tweaks with pickups and draft picks.

The team also resigned QB David Garrard to a big deal, making it known he will be the player to take them to the next level. They also looked to upgrade the WR spot, with grabbing Jerry Porter the first day of free agency, and trading for underachieving Vikings WR Troy Williamson. Cleo Lemon comes over from Miami to backup Garrard, and first-round draft pick Derrick Harvey and second-round pick Quintin Groves should help put pressure on the QB. Bottom line is this team needs to beat the Colts to take that next step – but they are closer than ever.

Offseason Grade to Date: B