Vikings DE Udeze Placed on Reserve List for the 08 Season 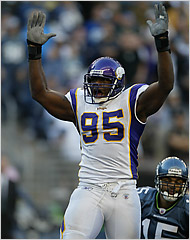 The season is already over for Vikings DE Kenechi Udeze, as today the team placed him on the reserve-non-football-illness list as he continues his fight against leukemia.  The move will ensure that Udeze will get his $807,500 salary for the 08 season.  “He can focus on getting well. He’s done a great job with that so far. He’s been positive. He’s been upbeat,” said Vikings coach Brad Childress.

Udeze stated two weeks ago that the cancer he is up against is in remission, and that his older brother has matching bone marrow for a pending transplant.  He signed a five-year deal with the Vikings back in 2004 when he was their first-round draft pick out of Souther California.  He will be a free agent after the season, but right now that is not something that is at the forefront of the situation.

“He’s such a competitor. You hate to burst bubbles, but realistically speaking you want to take his health and well being into consideration first,” the coach said .”He is welcome around here. He’ll be part of the team. As much as he can be around here, he’s going to be around here.”