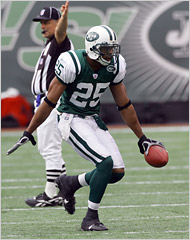 Best Move Yet: Jets Fans, You Can Now Applaud Your Team’s Front Office Decision To Properly Spend Money On A Player That Is Needed In Order For The Team To Be Successful. This Was A Wise Move As Your Team Finally Paid A Player It’s Actual Worth.
Earning His Pay, Overlooked No More: The Jets and standout safety Kerry Rhodes agreed to a contract extension that will keep the team’s best defensive playmaker in New York’s secondary for five more years.

The deal is worth $33.5 million, including $20 million guaranteed – making the former Louisville Cardinal one of the NFL’s top-paid safeties.

Rhodes, entering his fourth season, had a year left on his rookie contract and would have become an unrestricted free agent after this season. The ballhawking strong safety has made 270 tackles, collecting eight sacks and 10 interceptions in three seasons and has been a starter since being drafted in the fourth round out in 2005.

Rhodes Traveling Down Elite Road: The move clearly makes sense for both the Jets and Kerry Rhodes. Rhodes is a true leader on defense and I believe he is the team’s best player by far, so this new deal is well worth the commitment for New York and Rhodes definitely deserves it. During the past two seasons Rhodes has picked up 7 sacks, 9 picks, 23 passes defensed, five forced fumbles, and was also able to get his “groove” on once (look for more end zone dances/TD’s to follow). You can expect more of that same, consistent play to continue because of his fast development and his will to improve (Check Out: Player Profile). The 6-foot 3, 210-pound star is a force to be reckoned with, a nightmare for QB’s, and should’ve made the Pro Bowl in at least two of the three seasons he has played.

Top 5 Safety (Rhodes Story): You may not know him and might ask how he got to be a top safety? If you don’t know, now you know, as he will be recognized as a household name in the NFL for the next decade with the upper echelon, the best of the best. I place Rhodes in the same elite class as Bob Sanders, Troy Polamalu, and Ed Reed, and if he keeps playing the way he does, he has a great chance to surpass that trio and I believe he will eclipse the status of the three aforementioned safeties – so make room for Rhodes. Not only is the under appreciated Rhodes a difference-maker and a flat-out impact player, he is the main reason New York has a good defense and because he does it all, this move and money the J-E-T-S have “wisely” invested in is the most important move of their entire off-season despite all of their noteworthy, high-priced, big-named free agent acquisitions. Now all the Jets faithful desire, is for Revis to step his game up, enabling a dynamic connection with Rhodes to form a dominant 1-2 punch that can be a successful duo in New York’s secondary for years to come. Other than the signing of Faneca, Gang Green’s reliance upon too many “unproven” commodities has been a distraction for key veterans, but this decision to keep Rhodes in the Big Apple, counting on this “proven” commodity, is a big reason why Jets fans can hope for a playoff contending squad after extending a playmaker with a high caliber like Rhodes. Check Out Rhodes’ Comments On His Big Signing: Confident, Excited Rhodes Speaks