« Saints WR Colston Says He’ll Be Ready to go in 2008
Could The Colts Be Looking to at Life After Harrison? »

With Quinn Coming Aboard, is Rosenfels on the Trading Block? 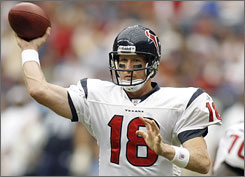 The QB spot in Houston appears to be in a flux, as the team is set to sign Quinn Gray to be their backup, which could mean that last seasons back up and sometime starter Sage Rosenfels could find himself on the trading block. Reports says that Rosenfels could garner the team as high as a fourth-round draft pick, despite the Texans thinking they could get a second or third round pick for him. Last season he was a valuable member of the Texans, throwing for 1684 yards and 15 touchdowns while playing in 9 games. He had a QB rating of 84.8.

The team is set to wrap up a deal with Gray today, and he will be the primary backup to Matt Schaub, who should be 100 percent after being hurt during parts of last season. Rosenfels is a six-year vet, playing for the Dolphins for the first four years of his career before joining the Texans in 2006. He has played in a career 26 games, with a QB rating of 82 while throwing 24 touchdowns and 19 picks. There will be plenty of teams looking for a backup like Rosenfels should be truly become available.

2 Responses to “With Quinn Coming Aboard, is Rosenfels on the Trading Block?”