Pacman To Become A Cowboy? 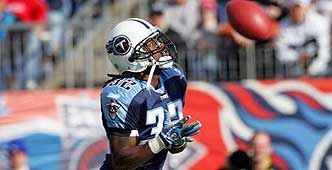 Talks appear to be heating up between the Tennessee Titans and Dallas Cowboys as according to Calvin Watkins of the Dallas Morning News, the Cowboys are holding discussions with the Titans about trading for suspended corerback Adam “Pacman” Jones; the Cowboys, if successful, could give up a late-round pick to obtain Jones.

However, according to a “source”, officials in Nashville aren’t in a hurry to ship Jones, yet they also know that the best way to move on without Jones is to trade him; Jones’ agent, Manny Arora, said that he has talked to several teams about Jones and would like a trade to take place before the NFL draft on April 26-27. According to an NFL spokesman, Jones, despite being suspended since April 2007, can still be traded; the Cowboys are currently around $3.9 million below the salary cap, and Jones is slated to make a base salary of $1.292 million million whenever he returns to the playing field.

Jones is due to become a free agent following the 2009 season, and a “source” has said that Jones is willing to take a lower salary to accomodate a team willing to take him. Arora has said that he wants to bring Jones to a team that has strong leadership at both the coaching and management levels, plus a strong off-the-field program. What I do think is that any team that has at least a fleeting interest in Jones is taking a major risk here. Jones, despite his suspensions – at least in my estimation – doesn’t seem all that repentant for his transgressions that got him in trouble in the first place. And believe it or not, there are people out there – athletes and non-athletes – who just don’t get it as they continue doing things that got them in trouble in the first place and still think they’re like “Teflon”. Consider Pacman Jones among one of those.

One Response to “Pacman To Become A Cowboy?”