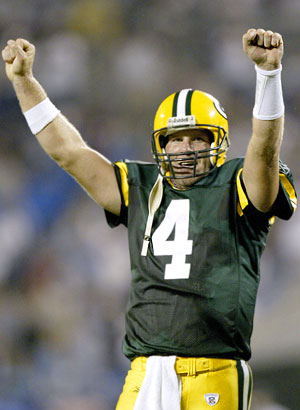 “Joyously unrestrained and enthusiastic”. This is the definition of exuberant according to the Merriam-Webster Online Dictionary.

For most football fans this can also be used to describe the career of Green Bay quarterback Brett Favre and what it was like watching him play the game he loved and the journey he embarked on that fateful Sunday in September of 1992 as he took the field to replace an injured Don Majkowski and lead the Packers to victory over the Cincinnati Bengals.

I was lucky enough to be in attendance at Lambeau Field that day for what turned out to be the beginning of something so special that it can only be described as miraculous. 253 consecutive regular season games started. Take a moment to consider this…nearly 16 seasons without missing a start…..not missing one after the first start of his NFL career. For a quarterback, that is unfathomable; yet we were lucky enough to witness it. Who among us could have imagined that this cast-off of the Atlanta Falcons from Kiln, MS would one day hold all of the meaningful NFL records for a quarterback, and set them all while wearing the revered Green and Gold? Of course there were times that tried the patience of coaches, teammates, and fans alike; but bringing a once proud franchise out of the depths of mediocrity and back into national prominence was more than enough to earn the confidence, respect, and dare we say, love of all skeptics and naysayers. For the diehards of PackerNation it was heaven.

For what it’s worth, I am of the belief that the “remember when” conversations should be saved for just that, conversations with your buddies…the people you shared all those moments with, whether it was out at the local sports bar, hanging in the rec room at home, or if you were lucky enough, huddled around a grill with a cold beer (regardless of the weather) then packing into the old time bleachers of one of sports greatest venues, the hallowed Lambeau Field. Given that, I do not feel compelled to bring any of them up. What is meaningful to each of us can be as different as the snow flakes that we watched so many touchdown passes fly through.

There are many moments to be recalled over the course of such an illustrious career and now that #4 has decided his passion to play the game has dwindled to the point that he can no longer motivate himself to take the field for another season, it is only natural for fans to reminisce about the highlights of a career that brought joy to so many and reflect on not only the things that were, but the things that could have been as well. The numerous records, the fantastic comebacks, the cold weather games, and yes, the untimely interceptions will all be rehashed around water coolers across the country this week and for good reason. Players that have such a profound effect on a team, a league, and a fan base only come around once in a blue moon, and when one reaches the inevitable point in their career in which they make the decision to hang up their cleats and leave the locker room behind, we as fans should be thankful for what was given us….the chance to spend our Sundays witnessing one of football’s all-time greats playing the game the way all games were meant to be played…. “Joyously unrestrained and enthusiastic.”