Bills Boost Their D-Line with a Trade for Marcus Stroud 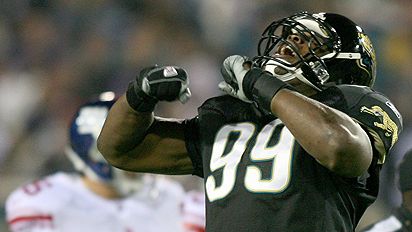 The Bills D-line got a major boost on Saturday, as the team made a deal with the Jags to trade for DT Marcus Stroud.  FoxSports.com is reporting that the Jags get a third and fifth round pick for Stroud, who the team threw on the trading block last week.  Stroud is set to make a whopping $6.4 million this season, and the Jags were concerned about the fact he had a suspension last season and its not known if he is going to be 100 percent after having an injured ankle.

Buffalo needs help on their D-line, last season they were awful against the run, allowing over 124 yards per game and overall they were ranked 25th.  The team opened up a spot on their line on Friday when they released Larry Triplett.  The 29-year old Stroud can be a force on the line if he can stay healthy and out of trouble.  He’s a three-time Pro Bowl DT, and last season in 9 games had 22 tackles and three sacks.  In his career, he has 278 career tackles and 22 sacks, his best season coming in 2004 when he had 54 tackles and 4.5 sacks.