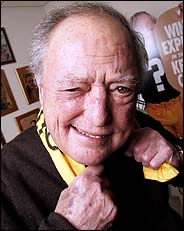 In Pittsburgh he was an icon, and on Wednesday morning at a nursing home in Mount Lebanon, he went to the big announcer booth in the sky. Steelers legendary announcer Myron Cope passed away early Wednesday at the age of 79. He will forever be remembered for his catch phrases, but most of all for his invention that Steeler fans still cherish to this day – the Terrible Towel.

Cope worked for the Steelers as their color man from 1970 to 2004, and was inducted into the National Radio Hall of Fame in 2005. After walking away, Cope continued to appear in radio, TV and print ads in and around the Pittsburgh area. The Terrible Towel that he created that became a symbol of Steelers football never netted him much, as the money he made from it went to charity.

“You were really part of it,” Steelers owner Dan Rooney told Cope in 2005. “You were part of the team. The Terrible Towel many times got us over the goal line.” Cope was a nationally known freelance sports writer, writing for Sports Illustrated and the Saturday Evening Post. He then moved on to radio, before finally getting into the Steelers announcer booth just in time for the team to go on a run in the 70’s and win four Super Bowls.

“He doesn’t play, he doesn’t put on a pair of pads, but he’s revered probably as much or more in Pittsburgh than Franco (Harris), all the guys,” running back Jerome Bettis said. “Everybody probably remembers Myron more than the greatest players, and that’s an incredible compliment.”