Browns and Lewis Agree to a Multi-Year Deal 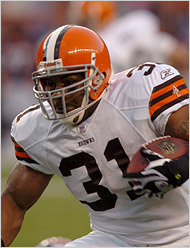 A week before he was set to become a free agent, the Browns improved their chances for another playoff run in 2008 as they have resigned running back Jamal Lewis to a two-year deal with a club option for a third.  The writing was on the wall from the moment the season ended that Lewis and the Browns were going to work hard to make sure that he stayed in Cleveland long-term.  He publicly spoke out about wanting to stay in Cleveland, and now he will get his wish.

Lewis had an outstanding first year with the Browns, rushing for 1304 yards, 86.9 yards per game.  He also ran for 9 touchdowns and caught 30 passes.  He ran for over 100 yards in four games, and in the second week of the season ran for a season-high 216 yards against the Bengals in a win at Browns Stadium.  He ran for 501 yards in the teams last four games, averaging 125.2 yards per game as the Browns went 3-1 down the stretch.

With Lewis coming back, the team can now focus on getting QB Derek Anderson wrapped up before he becomes an unrestricted free agent next week.  Word has been the team and Anderson have been back and forth about a three-year deal.  There were rumors that Anderson wanted a five-year deal, but the Browns only want to give him a three-year deal.