« There Be Trouble in These Here Waters:.
Bills QB Losman Speaks His Mind on Benching »

War of Words Taking Center Stage Between Thomas and Lewis 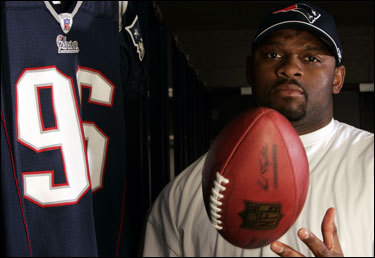 There appears to be no love lost between current Pats linebacker Adalius Thomas and Ravens linebacker Ray Lewis. The one-time teammates are now going at it in a war of words that started back on October 16th with some comments made by Thomas in a Sports Illustrated article. In that piece, Thomas gave his opinion about the difference between the Pats and Ravens. “People there wanted the limelight; people sought out the limelight, starting with the head coach. It was a star-studded system. Here it’s about as different as you can get,” Thomas said. “Everybody here shies away from being the star guy. Nobody on this team beats his chest. They just all go about their business. And win.”

Well Lewis, who was not exactly thrilled about hearing what Thomas said about his team, fired back on ESPN 1300 Monday night in Baltimore. “When you take a shot at men that you claim to love to go to war with, I call those cowards,” Lewis said. “If you have something to say privately, you don’t have to go to a newspaper. If you have something to say to a man, speak it.”

With that, Thomas had a crowd of reporters waiting for him when he came into the Pats locker room Wednesday, and to his credit, he fired right back at the loud Lewis, stating that there was just one problem that he had with what Lewis said. “The only problem I have is the coward comment,” Thomas said. “To call me a coward, you have my phone number. You can call me. I will call Ray personally, myself. As far as calling me a coward, I think that goes to something personal. I don’t like it.”

Then there was the comments by Lewis saying the following about how the Ravens had to change their D just to fit Thomas in. “We won a Super Bowl without Adalius Thomas. The New England Patriots won three Super Bowls without Adalius Thomas. You’re talking about a guy who we put in – a great talent, don’t ever get me wrong – but systematically we had to fit him into our schemes.”

And back to Thomas for the volley – “To attack my integrity, and say you had to make a scheme up for me, I didn’t know they made up outside linebacker for me,” Thomas fired back. “I know he was crying about a big guy in the middle so you can keep blockers off of you. I mean, I don’t know if that’s a scheme made for you or not. As far as that goes, if you want to criticize your head coach, talk about a coward. You can go right upstairs and talk to him like a man, just like you’re talking about me.”

So the back and forth goes on. The Ravens and Pats will play each other in December, and you can bet that if there is not enough time for a build for that battle, there will be a lot more words spoken by the two before then. Thomas did say he’ll try to solve the issue with Lewis before their game in December. “If I have something to say, anybody that knows me, I don’t hold my tongue for nobody,” Thomas said. “If I have something to say, I’ll say it to Ray, or I’ll say it to anybody else that is out there. But I’m not here to go back and forth with he said, she said or try to throw a quote at somebody that indirectly.”