Three Hot Seat Coaches Have Saved Their Jobs For Now 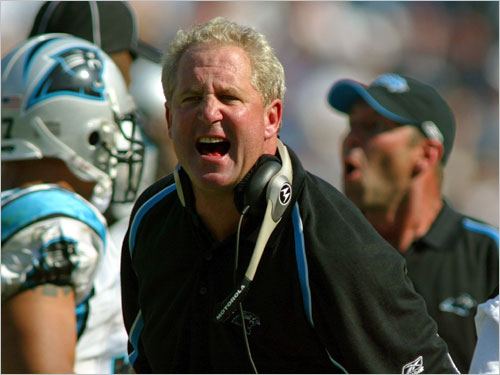 Remember back in August when we all were talking about where former Steelers coach Bill Cowher would coach next? The talk was hot that Bill would end up in one of three places come opening day in 2008 – Cleveland, Carolina, or New York with the Giants. Well, we’re now six weeks into the 2007 season, and unless one of those three teams has a major collapse, we may see Cowher still in front of a TV camera doing Sunday morning talk on CBS, where he’s done a solid job in his first season. Considering that the Browns and Giants started opening day with awful losses, you almost wrote his ticket to one of those cities after the first game. But give the Browns and Giants credit, they have become two of the surprise teams in 2007.

The Browns have relied on, and gotten, solid play from little regard quarterback Derek Anderson. The former Ravens QB has led the Browns to a 3-3 mark at their bye week, which in quite a few circles is two to three more wins than most people had them with on October 21st. The Browns are still quite a ways away from being one of the better teams in the conference filled with heavyweights, but they have shown great improvement, and it looks like GM Phil Savage made a smart move by trading former starter and Akron native Charlie Frye after a disaster in week one vs the Steelers. Braylon Edwards is starting to play like the player the Browns thought they were getting with the 3rd pick in the 2004 draft, and the rest of the offense has rallied around Anderson. I would not be shocked to see coach Romeo Crennel get an extension for a job well done.

In the media capital of the world – New York, the Giants are suddenly wild card contenders in the NFC after an 0-2 start that saw their defense allow 80 points. The rebound can be attributed to the defense, which started flexing their muscles in a win over Washington on the road, then on a Sunday night sacking Donovan McNabb a record 12 times in a 16-3 win over the Eagles. Plus the team has rallied around stud wide out Plaxico Burress, who has been the best wide out in the NFC on one good ankle. In looking ahead, the Giants have soft spots in their schedule that should allow them to win 10-11 games as long as their offense keeps up their momentum. As for Tom Coughlin, he’s now more amazingly more popular than the other New York football coach – Eric Mangini.

As for the Panthers, they haven’t won a home game yet, but are 4-0 on the road and beat the Cards Sunday with 43-year-old Vinny Testaverde as their starter. This may be the most up and down team in the league, and you have no idea week in and week out what team is going to show up. Nevertheless, John Fox has the team in first place, and will have to do patchwork the rest of the season without starting QB Jake Delhomme, and it will be ultra interesting if this team can challenge the Buccaneers (who already beat them once this season) and how much health will be an issue for this team entering the third quarter of the season.

So while we all know coaches will be fired by the end or following the 2007 season, the top contenders for coaching openings appear to have gotten on the right track to where these teams will retain their head coaches for the 2008 season and beyond.