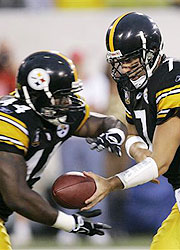 Pittsburgh Steelers reserve running back Najeh Davenport may be in hot water with Cleveland authorities; the Pittsburgh Post-Gazette is reporting that Cleveland police are investigating a domestric dispute that took place on Thursday night (October 4) involving Davenport and the mother of his 5-year old child. No charges have been filed, as of yet.

The incident originated between Davenport and Anita Person, mother of the 5-year old in question; police said the dispute was over custody of the child. In the 911 calls that took place between 8:45 PM and 9:02 PM on October 4, police state that allegations of domestic violence were made involving Davenport. Detectives, as per police protocol, will interview everyone involved – one would imagine that’s a limited number of people – and present their findings to the Cleveland city prosecutor for review. The process should take about a week.

Under current Ohio law, police have to arrest the “physical aggressor” in a domestic case; however, in this situation, they do not know who the aggressor was and as a result couldn’t charge anyone. Davenport is no stranger to legal scrapes; back in 2002 just before he was drafted by the Green Bay Packers, he was arrested by Miami Shores, FL police on charges of breaking into the Barry University dorm room of a sleeping Mary McCarthy. She awoke to find him squatting in her closet and defecating in her laundry basket. Davenport denied that claim; however, in a plea deal with authorities, he agreed to perform community service and in return prosecutors would drop the charges of burglary and criminal mischief.

One Response to “Steelers’ Davenport involved in domestic dispute?”