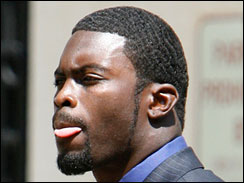 As reported by Charles Odum of the Associated Press, the Atlanta Falcons will attempt to recoup up to $22 million in bonus money paid to suspended Falcons quarterback Michael Vick. The proceedings will take place with the Falcons being represented by team president and general manager Rich McKay while the NFL Players Association will be represented by outside counsel. The arbitrator in this case will be Stephen B. Burbank, University of Pennsylvania law professor.

Burbank stated that the hearing shouldn’t go beyond a day. The Falcons will argue that Vick knew from the beginning that he was in violation of the contract when he signed the $130 million contract with the team in November 2004, and that he used proceeds from the contract to finance the dogfighting operation in which Vick is in legal hot water in at the moment. McKay was unavailable for comment and Falcons spokesman Reggie Roberts indicated that McKay will stand by his earlier statements about no comments during this process.

One interesting point of view comes from an expert in sports contracts, one Jerry Reisman, a contract and business attorney based out of Garden City, NY. He told AP, “I think clearly it’s a reach on the part of the Falcons. I think Vick earned that money. He received the roster bonus given out if you are on a roster at any point. He was on the roster in 2004 and earned the money.” Reisman also stated that under the NFL’s collective bargaining agreement, bonus money earned cannot be returned.

Another comment made by Reisman, which almost smacks of being irrelevant to the case, is interesting as well; he said that the Falcons are asking for a refund from Vick yet, “I don’t know the Falcons have given back season tickets they sold.” I’m obviously not a business major nor do I claim to be, but historically cases like this (the Ashley Lelie case comes to mind) usually end up going in the favor of the defendant (in this case, Michael Vick). But then again, evidence will be plentiful, so how the proceedings at the end of the day turn out should be interesting – and perhaps precedent setting. Incidentally, the hearing will take place in Philadelphia, PA with a date yet undetermined.