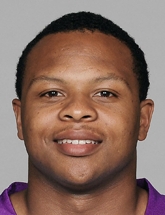 With Cadillac Williams in the garage for the remainder of the 2007 season, the Bucs feel they have to go out and look for another running back to help out with now backs Michael Pittman and Ernest Graham.  Their first attempt to grab a back came Tuesday, as the team made inquiries to the Minnesota Vikings about back Mewelde Moore.  The Vikings, knowing the situation with the Bucs all too well, asked them for a first-round pick for Moore, which of course Tampa Bay basically laughed at.

There were also reports on Tuesday on the Tampa Tribune website that Bucs GM Bruce Allen was looking to put together a deal for Vikings left tackle Bryant McKinnie and Taylor. McKinnie would take over the Bucs left tackle spot that was left open to a season-ending injury to their left tackle, Luke Petitgout.  Once again though, it was shelved as just a rumor and to this point nothing more has come of it.

You can bet though the phone lines in Tampa Bay will be burning as the team looks for both RB and LT with Williams and Petitgout out for the rest of the season.  At 3-1, the Bucs do not want their season to be flushed down the toilet with two major injuries on Sunday taking them out of the hunt for the NFC South title.