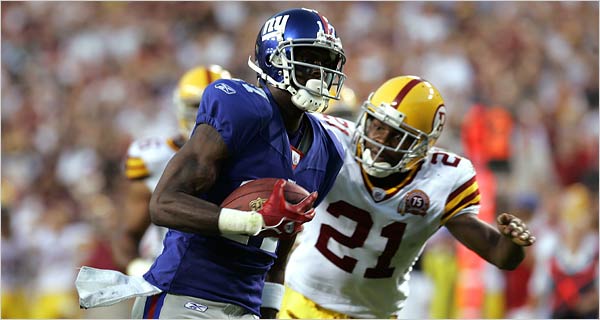 The concern over the ankle injury being nursed by Giants wide out Plaxico Burress is becoming a major issue for both Burress and the team.  Wednesday Burress flew to Charlotte N.C. to have his injury checked out by an orthopedic specialist. The injury has been called a sprain from day one, and the only thing the team would confirm is that the ankle is not broken.  The injury took place during the first week of camp, and while Burress has played with the injury, it might force him to miss playing time if it continues.

“He’s not practicing and he’s coming into the games,” Coughlin said. “To his credit, he knows his assignments. But obviously he’s not as sharp as he can be.”  Burress was the MVP in Sunday’s win over the Redskins, as he pulled in the game-winning TD, and caught five passes in the second half for 86 yards to lead the comeback for the Big Blue.  Burress has been the biggest offensive threat this season for New York, catching 15 passes for 262 yards and five TD’s.  The five touchdowns leads the team.

The Giants will try to claw back to 2-2 this weekend when they play the Eagles, a team that Burress owns.  Last season Burress had 234 yards vs Philly in the regular season, and caught two TD’s in the playoff game loss.  “He is big, fast, strong and smart,” Eagles coach Andy Reid said Wednesday of Burress.  The dropoff after Burress is evident, as the team would have to go with Anthony Mix a rookie who has just three catches this season.

QB Eli Manning tried to downplay the possible loss of Burress, but he can’t hide that Plax is the man in New York.  “I don’t think it changes much,” Manning said. “We just got to do our offense and just go out there. Whoever’s in there at his spot has to perform well for us.”  The problem is after Burress there is not much on the wide out core that could take the place of the playmaker.