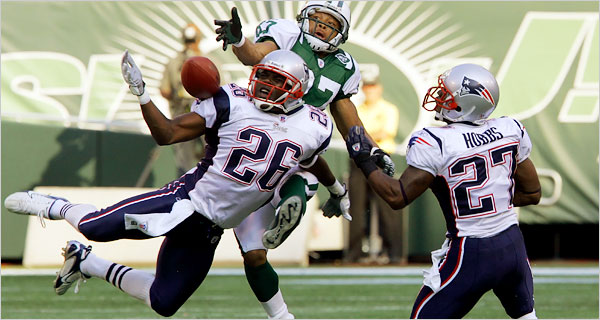 The Pats are very happy to have cornerback Asante Samuel back with the team and ready to go for 2007, but his status for Sunday vs the New York Jets at the Meadowlands in New Jersey remains in question.  Samuel has been working hard to get back up to speed with his teammates as the Pats get ready for the opener, and how much or if he will play Sunday remains a hot topic.  “I guess we’ll have to wait and see on Sunday,” Samuel said. “I’m just going out and practicing and working hard.”

Samuel missed a ton of camp this past summer, as he didn’t report until August 28th, going through an ugly holdout that included him making threats of sitting out the first 10 games of the season.  He finally did show up, and signed a one-year deal instead of what he wanted, which was a mega-deal long term contract.  Even coach Bill Belichick has stated that he would be next to impossible for Samuel to be where his teammates would be, but that does not answer the question of when and how much he will play.

Right now the Pats roster sits at 53 players, giving an indication that he will take the field this weekend.  It might be a deal where the team is willing to put him out there, but if he struggles early, the team may be forced to pull him until they can be sure that he is to the form of last season, when he had a career-high 10 interceptions.