Giants and Strahan Not Sure About Playing Sunday 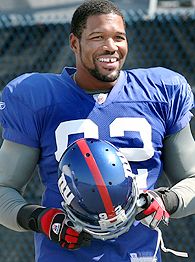 Cowboys in Dallas.  Strahan rejoined the team Monday after holding out the entire traning camp and four preseason games, stating that he was torn and was not sure if he was even going to play in 2007.  Then, as many predicted he would, he came back to the team just in time for the season.  “You know you just want to come back,” Strahan said Tuesday after rejoining the team and practicing. “I felt I wanted to play football, plain and simple. I wanted to enjoy it. I wanted to come here and enjoy myself, play football, enjoy my teammates and the fans and just do it — do it one more time.”

The fines that the Giants hit Strahan up with came to over $500,000.  He said that despite that, he might play after the 07 season, making the holdout even more absurd.  One has to wonder if he does decide to come back in 2008, if he will try the same thing next season to avoid hard practices.  If there is a new coaching staff in place if the Giants do not play up to standards in 07 and current coach Tom Coughlin is let go, that new staff may not even want Strahan if he pulls the same tricks again.  You never can tell.  Back to the present, both Strahn and Coughlin stated Tuesday that the thought of playing Sunday in Dallas is there, but it’s not 100 percent the 35-year-old will take the field.  The team does have a two-game roster exemption in case he is not ready.

“He appears to be in good shape,” Coughlin said. “Of course he hasn’t had any contact. But we have to work our way through all of that.”  Strahan is the NFL’s active sacks leader with 132½ and the holder of the single-season record for sacks, 22½.  He says that part of the reason he sat out 39 dyas was that his Dad told him that he had done everything he wanted to do playing football, and maybe it was time to move on.  “Basically, he said to me: ‘Son you did enough,'” Strahan said. “It’s hard to go against that.”