Breaking Down the NFC West 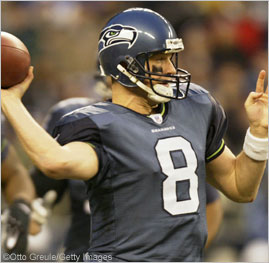 The NFC West is the one true division in the NFL that you can say is really up for grabs. The four-team division can see any of the four teams come out of it as champions. With a lot of young talent, a new coach in Arizona, the rebirth of the 49’ers last year, and a Hawks team looking to regain the Super Bowl form of two seasons ago, there are a lot of interesting storylines to this division. Here is our breakdown of this tough division.

Seattle: 2007 Prediction 10-6 – The Hawks still feel robbed after losing Super Bowl XL to Pittsburgh, and last season had to undergo quite a few big injuries just to make it to 9-7 and the second round of the playoffs. Qwest Field, where they went 8-0 and 2-0 in the playoffs in 2005, became very normal to visiting teams in 2006, as Seattle went an average 5-3 at home and then squeaked out a playoff win over Dallas. This seasons key will be to keep everyone on the field, as both QB Matt Hasslebeck and RB Shaun Alexander need to stay as close to 100 percent as possible for this team to return to form. Letting WR Darrell Jackson go was a head scratcher, but the pickup of DE Patrick Kerney will help the defense. The month of December is a tough stretch, with games at Philly, vs Arizona, at Carolina, vs Baltimore and at Atlanta.

Arizona: 2007 Prediction 9-7 – After picking them last year as one of my “3 Surprise Teams in the NFC” (along with Philly and St. Louis), the Cards won their opener and then lost their next 8, sealing the fate of head coach Denny Green. This season is a new look for the Birds, with former Steelers offensive coach Ken Whisenhunt taking over, and good pal Rumm Grimm in as O-line and assistant coach. Look for Whisenhunt to make Matt Leinart a top 10 QB, and the running game will finally get going with Grimm making the line better for Edgerrin James. Arizona is still a year away, but this will be a breakthrough season in the desert.

SF 49’ers: 2007 Predication 8-8 – The 49’ers are another team on their way back, and last year showed that Alex Smith was the right choice at number one three years ago in the draft. Mike Nolan added some pieces in the offseason, including Nate Clements at corner, Darrell Jackson at wide out, and Tully Banta-Cain at linebacker. Frank Gore came into his own with over 2,000 all-purpose yards, and for the first time since 2002 the Niners look like a team that really will have to be contended with. At 7-9 last year, an 8-8 mark in 2007 is another step in the right direction.

St. Louis Rams: 2007 Prediction 8-8 – New coach Scott Linehan had the Rams thinking playoffs early last year when they started 4-1, but then after a 3-point loss to the Hawks, the bottom fell out and the team limped through a five game losing streak before winning their last three to wrap up the year at 8-8. The big problem was the defense, which was like swiss cheese, allowing over 145 yards per game on the ground, 31st in the league. They will try to shore that up in 2007, and should be better in that department. As for the offense, Marc Bulger is now signed and happy, and the running game with Stephen Jackson should be solid. Another team that easily could give others problems.

2 Responses to “Breaking Down the NFC West”