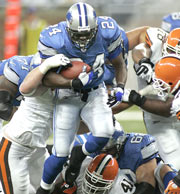 2007 season on the Physically Unable to Perform list, meaning that he will not be able to play for the first five Lions games of the season.  The rule states you have to sit out the first six weeks, but the Lions catch a break in that they have a bye in week six.  The conclusion about Jones starting the season on the PUP list was confirmed by Lions trainers as well as the surgeon that performed the Lisfranc surgery on Jones’ left foot.

Dr.Richard Anderson took a look at Jones’ foot earlier today, and talked to Lions officials before reaching the conclusion that it would be in the backs best interest to start the season off the field.  While Jones’ foot is close to being 100 percent, the team is going to be cautious about rushing him back on the field, and the good news is that Jones is expected to come back and be able to run and cut without losing much from the injury.

For now, the running back spot with the Lions will go to Tatum Bell, who the team got in the offseason.  Bell should be able to fill the void of Jones and more, as last season he ran for 1025 yards and two rushing TD’s with the Denver Broncos.  Denver moved Bell to the Lions, as they will go with former Titans and Bills running back Travis Henry.  Jones last season before getting hurt played in 12 games and rushed for 689 yards and six touchdowns.