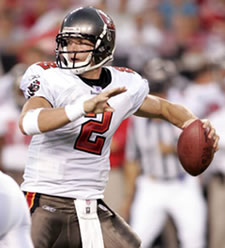 Tampa Bay Buccaneers quarterback has to be one of the unluckiest players in the National Football League right now.  First he has a splenectomy (operation to remove his spleen), then he finds out he is #4 on the team’s QB depth chart, which has to at the very least be somewhat unsettling to him.  Physically, he is doing just fine, save for his left arm which has jinxed him on occasion.  But tonight’s game against the Houston Texans will more than likely determine his future in a Bucs’ uniform.

Team head coach Jon Gruden, in his trademark speaking style, told Rick Stroud of the St. Petersburg Times, “Look, I love the guy.  We’ve had five years together.  Who knows?  We may have five more together, you never know.  There’s a lot left unsaid about his future and his career right now, and we’re trying like hell to give him a chance to resume his normal playing status.”  Normal playing status?  What normal playing status?  It looks almost crystal clear that Simms’ days as a Buccaneer are very quickly coming to a close.  The team obviously isn’t going to keep four QB’s, as Jeff Garcia will be the starter, followed by either Luke McCown or Bruce Gradkowski.

One obstacle with Simms’ status with the Bucs is that fact that the team invested a lot of money in Simms – they signed him to a two-year extension in the offseason which includes $5 million in guaranteed money.  There’s the remote possibility that they may hang onto Simms in the hopes that a team in the league loses a QB to injury thus giving the Bucs some leverage in a possible trade scenario.  But regardless, the Bucs have a decision to make and they to make it very quickly.  What Simms does tonight, assuming he plays at all, may be a factor in what happens to him in the not too distant future.