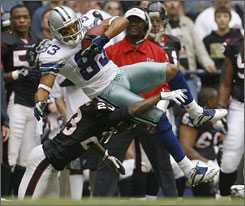 If the Dallas Cowboys want to get a head start out of the gate, a healthy receiving corps will go a long ways towards that end.  Tim McMahon of the Dallas Morning News is reporting that wide receiver Terry Glenn intends to practice for the first time and start the team’s season opener against the New York Giants.  Glenn, by his own admission, stated that he isn’t sure he will be at full speed in the next few days, telling the Morning News on Wednesday, “We’ll see.  Can’t say too much about that right now, but we’ll see.”

Glenn also said that he was not certain about he would be ready for the season opener; he also didn’t sound very optimistic that he would be ready in two weeks’ time, either.  From all apperances it looks like the Cowboys will have to do without the services of Glenn for at least the first week of the regular season, if not a bit longer.  But I would suspect that this issue will be addressed very soon.  And the NFC East being the strong division that it is, it is imperative that Glenn get healthy and on the field as soon as possible.