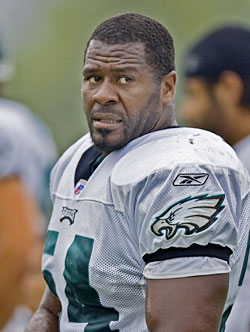 News: The Philadelphia Eagles found themselves in the headlines by making an attention-grabbing, roster cut (eye-opening – I don’t think so), with a not-so shocking, turn of events (tables have turned before and this change shouldn’t be too shocking; it happened before), Philly deciding to end the Pro Bowl linebacker’s second go-around with the team, as he was released today because of the young developing players (Gaither, Gocong, and Bradley) being groomed to take over the MLB spot, and for cap reasons, of course.  Trotter, who’s getting older and losing quickness, is still expected to be snatched up soon by a team that desperately wants to add depth at LB.

What’s Said about the Choice: Coach Andy Reid informed Trotter of his decision Monday night during an emotional meeting. Trotter was a fan favorite because of his intensity, big hits, leadership, and spark to the Eagles (personality). They will replace him with a variety of young players that possess the skills, size, and playmaking ability to make his loss forgettable. The memory of his play will remain with the team because of his veteran presence on the field, as he was a tackling-machine during some games, and as a nice guy off of it, helping out in the community.

“Jeremiah and I have been together for many years and he’s played a vital role in helping this team win a lot of football games,” Reid said in a statement. “He developed himself into a Pro Bowl middle linebacker through a lot of hard work and desire. In my mind, he will always be a Philadelphia Eagle and I’m sure he feels the same way.”

Career: The 30-year-old Trotter spent four seasons in Philadelphia before a quick departure as a free agent after the 2001 season. Trotter spent two unsuccessful years with the Washington Redskins, but made amends with Reid and signed a one-year deal with the Eagles following the 2003 season.

He started the 2004 season on special teams but ended up in the Pro Bowl. He had been the starter in the middle since.

The Eagles drafted Trotter out of Stephen F. Austin in the third round in 1998. He became the starting middle linebacker the next season and set a career high with 202 tackles in 1999. In ’06 he was solid but unspectacular, recording 113 tackles, to go along with a sack and an interception.

Effect on Super Bowl Chances in 2007: This move was a good one for both sides, especially the Philadelphia Eagles. Now they can move on and see what the young guns can do. They will have a trio of LB’s to make up the small-sized loss and the move will turn out to be successful ( Gaither has more talent, playmaking ability, and explosiveness than Trotter) because of the skill they have. The MLB position will not be hard to fill, and they will go no further to find their man to “man the middle” – looking to there own backyard (depth chart) as they will find one of these three players to make the transition from back up to starter.

The Replacement: It will most likely be: 2006 5th round draft choice Omar Gaither (Tennessee). He will be the first in line to take care of the void, as he will look to build on his rookie year of 64 tackles, in which he also picked up a sack and an interception. The other two, big linebackers like Trotter, Stewart Bradley (Nebraska) and Chris Gocong (’06 3rd round – missed the entire season), will also make sure this move works out just fine. Gaither will bring the versatility and speed, at 6-foot 1, 235 pounds.

He was a key factor for Philly in the two playoff games vs. New York in a win (7 tackles) and New Orleans in a strong effort (6 tackles). Gaither became more of a contributor towards the end of last year, totaling stops of 10 and 14, in some of his best games, while making big plays for the Eagles in close games. Whoever the starter at MLB is, that player does not have to pile up tackles in bunches (Takeo Spikes will be there to do that), rack up the sacks (Cole, Howard, Kearse, and Eagles defensive coordinator Jim Johnson, is a mastermind, assigning his famous blitz plans/packages to pick â€˜em up), and make lots of picks (That’s what Dawkins, Sheppard, and Brown are for). They just need to limit the mistakes, be sure tacklers in short-yardage situations and in the open-field, and make the position a strength, a force that the Eagles can rely on at times, but not all the time.

It will take an effort, albeit one that can be attained, not one that has to be “Rocky-like” in Philadelphia this season, for a team that is destined to go all the way, returning a rock-solid defense, explosive offense, and squad that is hungry to return to the Super Bowl. The replacement at middle linebacker (Gaither ultimately) will make sure Eagle fans will not notice the difference in play, proving his stance at the spot is more than just one of a capable back-up, but a reliable factor in an elite defense (Top 5-worth), as the best fans in the NFL, will be accustomed/able to hold up signs of “Jeremiah-WHO?!?”