« Broncos Hurting with Injuries to Henry, Ekuban, Others
WR Ferguson gets Workout with Vikings »

Is Strahan Close to Coming Back to Giants? 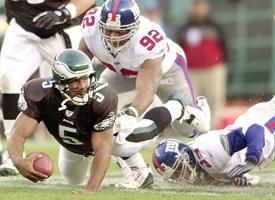 The Giants all of a sudden have a ray of hope for strengthening their defensive end position.  A “source” close to the Michael Strahan situation has verified and Arthur Blank of Newsday is reporting that the Giants DE more than likely will report to the Giants, perhaps as early as this Saturday, when the Giants play the New York Jets at Giants Stadium.  This has to be good news for the team, as the defensive end position was unsettled during training camp, despite the depth.

The “source” stated that Strahan’s agent, Tony Agnone, met with Giants general manager Jerry Reese on Sunday and all indications point towards Strahan returning to the team for the final two weeks of the preseason.  As per usual, Reese declined comment.  Agnone did acknowledge that Strahan would need to make a decision relatively soon, telling Newsday, “He does want to get his work in and be ready for the season, if that’s what he chooses to do.”

The “source” further went on to say that the Giants, despite the lengthy holdout, would probably not force Strahan to pay the entire fine levied against him, due to Strahan’s esteemed status with the team; as of this writing, the fines have accrued to $400,064.  Reese also added, “You just can’t show up and play in the National Football League.  If he decides to come, I think he will be here soon, but it’s still his decision and we’ll see what happens in the next few days.”

All I know is that the sands in the hourglass are dwindling for Strahan and he needs to make a very quick decision, as the Giants can and will move on without him.  It isn’t like the team doesn’t have reinforcements to take his spot at DE.  Strahan’s family has been urging him to retire, but I have this feeling that Strahan will indeed report to the Giants fairly soon.  What bargaining chip Strahan tried to use (in this case the “threaten to retire” chip) will backfire in his face.  And quite frankly, this is a financial thing with Strahan, more so than respect and what not.  He wasn’t going to get Dwight Freeney money as it were.  The Giants will be tickled pink to have Strahan back as he’s very proficient on run defense, as well as sacking the QB.