With Jones on the Shelf, is Houston an Option?

While the New York Jets continue to look at their options 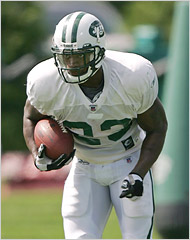 with feature running back Thomas Jones on the shelf with a strained calf muscle, one player that may be back in the mix is Cedric Houston.  The 25-year-old Houston out of nowhere left the Jets early in training camp, stating that he was going to give up football and retire.  Now with Jones on the shelf, at least for a few weeks from reports, Houston may be of some value to New York.

“We’re always open to any possibility,” Jets coach Eric Mangini said. “But with that, those are personal decisions, and I respect the decision he made.”  One player reached out already to Houston to see about him coming back, and got back at text message stating: “I’m fine.”  Last season with the Jets Houston got one start, and carried the ball for 113 yards and averaged 3.3 yards per carry.  Leon Washington will now assume the starters role until Jones is healthy enough to get back on the field.

Houston’s own mother, Lynette, stated in Wednesday’s New York Times that she is not giving up on her son going back to the NFL.  “I don’t know what Ced has in his mind,” she said.  “When Ced left home for New York, he had high hopes.  “The way he did it, it doesn’t make any sense. I wish he would go back. I believe he needs football. He’s got to be bored.”  Cedric told his mother he was leaving the game and was going back to school to complete his degree in sociology.

For now, Jones is trying his best to work his leg out to make sure he’ll be ready to go September 9th vs the Patriots.  If he is unable to do so, there would be room for Houston back on the Jets roster.  Now the ball is back in his court if he wants to take advantage of that opportunity or not.  So far, it looks like he’s letting the opportunity pass him by.