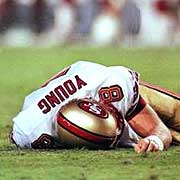 You really have to question the new concussion guidelines in the NFL. The guidelines improve what happens after a player suffers a concussion but it does NOTHING to prevent concussions.  Concussions are not completely preventable but there is something the NFL could institute that would reduce the likelihood of a player sustaining a concussion.

Dr. Gerald Maher of Mahercor Laboratiories is a team dentist with the New England Patriots and has developed a medical device that is similar to a mouth-piece that reduces a player’s susceptibility to concussions.  Mark Picot, Executive Vice President of Mahercor Laboratories compared the device to a seat belt; it reduces the likelihood of being seriously injured.  Most concussions are sustained from blows to the jaw and this device stabilizes the jaw thus reducing the chances of a player suffering a concussion but the Patriot players are the only ones in the league wearing them.  Ted Johnson has so much faith in the device that after retired he brought his two nephews to get fitted for the mouthguard.  The most impressive stat is that no NFL player wearing The Maher Mouth Guard has ever succumbed to a concussion from a blow to the jaw.

Dr. Maher has contacted the NFL and commissioner Roger Goodell about his findings regarding concussions and the reasoning behind his device but his words have fallen upon deaf ears at the NFL.  The NFL conducts its concussion research with antiquated automotive crash dummies that were designed for the study of automobile crashes not concussions.

Dr. Maher is a respected professional who has fit loads of world-class athletes with The Maher Mouth Guard.  Most recently the Arena Football league requested the help of Dr. Maher and his mouthguard.  He has worked with six world champion boxers.  This doctor knows a way to reduce the number of concussions in the NFL and they won’t listen to him.  Why does the NFL refuse to recognize this research and a product
that could help them prevent concussions?  Perhaps it’s because it would prove their liability because they have known about this prevention and haven’t provided it to their players.

Whatever the reason may be is moot.  There is way to reduce concussions and the NFL is not doing it, meanwhile players are suffering concussions and causing irreparable harm to their brains.