« With Jones on the Shelf, is Houston an Option?
Maroney Says He’ll be Ready to Shoulder the Load Come Opening Day » 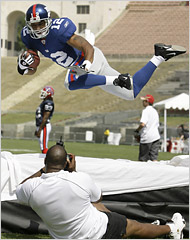 The Giants are continuing to get more and more excited about the upside they see from second round pick wide receiver Steve Smith.  The USC wide out has done all that has been asked of him so far this training camp, and looks as if he is going to push for some serious playing time once the regular season kicks in.  The team already thinks that Smith can be a solid addition to a wide out core that boasts Plaxico Burress and Amani Toomer.

“The kid makes catches,” coach Tom Coughlin said. “That’s a very positive thing that he brings to the table. He’s working hard. He wants to be a player. He’s got a full plate, and he’s trying to deal with that, but when has the opportunity, he has made some, like he did this morning, a real outstanding catch.”  Another reason why Smith has been valuable is just the fact he’s been able to take the field.  Burress has missed more than a week of camp with a sore ankle, and that has resulted in more time on the field for Smith.

“Some days are tougher than others, but I just want to stay level-headed and keep working,” Smith said when asked to assess training camp. “I’d say the toughest thing has been making hot reads, getting the timing down with the quarterback. That and getting used to these cornerbacks, how they jam you at the line of scrimmage. I saw that in college, but the cornerbacks here are smarter.”  Last season as a senior he caught 71 passes for 1,083 yards and 9 touchdowns.  The Giants would be thrilled with any type of production like that out of the second rounder.

Even the veteran Burress, who is known for his moods, has liked what he has seen from Smith.  “He a savvy player,” Burress said. “He doesn’t play like a rookie. He makes plays that rookies don’t make. He has good hands, but he has tremendous ball skills. He can locate a ball whether it’s over the inside shoulder, outside shoulder, or in traffic. And he knows how to get open. He’s not a 4.3 guy or 4.4 guy, but every time you look at him he has separation. In this league, if you can get off the line of scrimmage and get separation, you can play for a long time.”