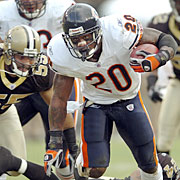 2006 to rest, and so far this summer it’s been all good for the new backfield led by new running back Thomas Jones.  Tonight he and the rest of his teammates look to put the past to bed, and start a new era of running the ball in New York.  Jones, the former Chicago Bear back who came to the team in the offseason and signed a four-year $20 million dollar deal, is set to make the Jets backfield his own.  He has rushed for 2,545 over the past two seasons, and give New York the best back they have had since Curtis Martin in his prime.

Teamming up with Jones will be Darian Barnes, who will lead the way opening holes with his 240-pound battering ram like frame.  He has been a blocker the last two years with Miami, and the Jets hope that he can bring some attitude to the Jets backfield while at the same time open holes for Jones to run through.  When Jones does need a breather, look for last year holdover Leon Washington to still get some carries and provide a spark.  “That will evolve because there will be some weeks where Leon will get more carries and that will fluctuate, week-in and week-out,” coach Eric Mangini said. “What you want to be able to do is have the flexibility to adjust to whatever you’re seeing.”

The Jets have to run better in 2007 if they are going to even come close to taking a next step after last years 10-6 playoff run.  With Jones, Washington and Barnes leading the way, it should allow more time for play action from QB Chad Pennington, as well as the defense not being able to simply sit back and play the pass as much as they did last season.  Don’t also forget that Jones can catch, which could be interesting to see as well.  The first glimpse of the new look comes at home tonight, as the Jets host the Atlanta Faclons, a team in panic mode with their franchise QB awaiting trial.  Should be interesting to see what the Jets backfield can do.  And would be great for them to get off to a fast start.