Colts May Turn to Sapp, Johnson to Fill McFarland’s Void

With Anthony McFarland likely to miss the season after injuring his knee, the Colts are 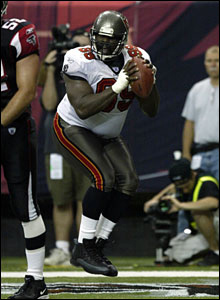 going to take a hard look at who may be out there as far as defensive tackles are concerned.  Head coach Tony Dungy said on Monday that McFarland’s injury is “long-term” and that the team is going to have to have “some other guys that have to pick up the slack.”  While there is no one on the current roster that can simply fill the role of McFarland, there are some players out there that can come in and do the job.

According to the Indy Star, there are two names that may be able to fill the void – Oakland’s Warren Sapp and former Bears DE Tank Johnson.  The 34-year-old Sapp may be on his way out in Oakland, as there has been talk of the Raiders, with new coach Lane Kiffin, wanting to get younger, and that may mean the end of Sapp in silver and black.  As for Johnson, if he can get his personal life and head on straight, there is no doubt that he can still be a force on the D-line.

The agent for Johnson, Bill Heck, said that as of Monday afternoon the Colts had not made contact with Tank.  Dungy Monday didn’t give any hints of going outside the current roster for help, and said that “for the most part, guys who are here are the guys we’re counting on.”  Those guys include Raheem Brock, third-round pick Quinn Pitcock, and seventh-round draft choice Keyunta Dawson.  Pitcock, who played at Ohio State, says that he is looking forward at the shot at filling in.  “From the beginning I wanted to get in and play as much as I could,” he said. “I was going to step up no matter what.”