Packers Give Driver Contract Extension Through 2009 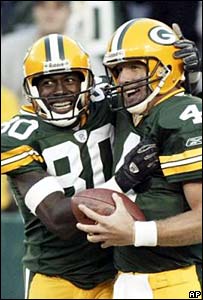 The Packers have locked up wide out Donald Driver through the 2009 season after he signed a deal on Sunday night to stay with the team. Driver restructured his deal which includes $11 million in “new money,” and his per year salary will go up quite a bit according to the Milwaukee Journal Sentinel. Driver is now due $5.75 mil per season, with what the paper is calling a “dummy year” for 2010 in which he would make $7.2 million. The 32-year-old is coming back after a shoulder injury, but the team did not seem too concerned about him making it all the way back and having a solid 2007.

“I always felt like I was going to be one of the top receivers in the league,” Driver said Saturday night. “I guess that’s how everybody in the world (would) want to get compensated. I feel like I’m a top five receiver in the league. I’ve been a Green Bay Packer for life.” Last season Driver had a big year, catching 92 passes for 1295 yards and 8 touchdowns. He also showed big play ability, with 21 plays of over 20 yards or more, and five plays of 40+ yards. He has gone over 1200 yards per season for the last three years, and in his career has 421 catches for 5929 yards and 36 touchdowns. What is somewhat unsure is if Driver was asking the team for a new deal, or if they approached him hoping to lock him up so he cannot go free agent down the road.

Don’t forget it was Driver who spoke out before last season telling everyone how underpaid he was. The Packers then added two more years to his deal raising it to $17 million over four years. He did respond with having another solid season and with the Packers again not going out and grabbing a big name in the receiver market in the offseason, Driver will again be the main focus of the passing game for Green Bay in 2007. “I think everyone in this locker room, once they find out, they may feel like I deserve it,” Driver said. “And I’m hoping that’s how it is. I’m hoping no one gets upset and says they feel like they deserve one. If they feel like they deserve one, then I respect them if they do get one.”