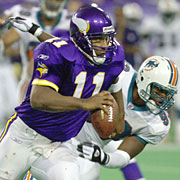 to a one-year deal, according to a source known with the situation.  This would be a good move for the Raiders because as I stated in Saturday’s July 28 article, “Raiders QB Russell to start Week 1?” this team does not have a “worthy” starting QB to go in there for Russell no matter how long he holds out. Now they do, as they are expected to pick up the former Central Florida QB Culpepper. Culpepper should be the favorite to be under center against Detroit at home for Week 1. Oakland has been pleased with his workouts and so far he is a “go” in terms of his questioned, and often speculated health.
Culpepper has a strong arm and still has some mobility left in him. He is a major upgrade over McCown and Walter. He should be able to keep the seat warm for Russell when he is ready to start.

Culpepper will be a mentor for Russell, as they share a similar style of play and have almost the exact same size, with Russell being two inches taller. He is the veteran starting QB the Raiders and Al Davis have been looking for since they drafted JaMarcus Russell out of LSU with the #1 overall selection. Oakland knew all along he would still be available and he would be the ideal fit and choice to help Russell learn from the sidelines for now.