Redskins’ Springs to be traded? 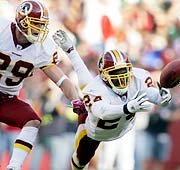 Despite the fact that Redskins cornerback Shawn Springs had a busy offseason (recovery from a broken shoulder blade, being the prinicipal in numerous trade talks, refusing to take a pay cut and choosing to work out on his own away from the team), Springs arrived at Redskins training camp.  Springs, as one would expect, stated that the trade rumors did not bother him; to add fuel to the fire, at least one team (Denver Broncos) has expressed an interest in Springs.

In a conversation with Ryan O’Halloran of the Washington Times at the team’s training camp facility, he said, “I’ve been around the league because of my dad and as an athlete, you’re an independent contractor.  “That’s part of the business.  I took it as flattering that other teams wanted me.  Everybody was doing what they can do to improve their organization.  I’ll worry when other teams don’t want me.  Bottom line.  I think I can ball, I think other people think I can ball.  I think this organization thinks I can ball.”

He also admitted that he wanted to return to the form that made him one of the league’s top CB’s back in 2004 and 2005.  I expect Springs to get traded between now and the first game of the team’s preseason.  Too many variables are in play here plus the fact he counts approximately $7.35 million against the salary cap.  That’s not to say that he can’t return to his former self on the playing field.  If anything, it is just a matter of the Redskins simply cutting their losses and going towards a youth movement in their secondary.  But with the Redskins owner being Dan Snyder, you have to sometimes expect the unexpected.