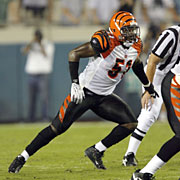 regard to his possible reinstatement to the league. The team was hoping that a decision would come down on Monday, but a league spokesman told the Cincy Enquirer that there is nothing to report in the case, leaving the team to wait for today or tomorrow for a decision. The linebacker had applied for reinstatement last month after he was suspended for the entire 2006 season for a third violation of the NFL substance abuse policy.

Thurman had been suspended before for a second violation, and his third offense was a DUI on September 25th of last year. The Bengals believe that a decision on Thurman will come before the team takes the practice field for the first time on Friday at 3 p.m., hoping that their linebacker can be on the field with them if all goes as planned. There is also a chance that head coach Marvin Lewis may wait to let the public know the decision at about reinstatement until their annual pre-training camp luncheon today at Paul Brown Stadium.

The agent for Thurman, Safarrah Lawson stated on Monday that he has heard nothing from the league about his client. “The silence has been deafening,” Lawson said. The 6-foot, 235 pound linebacker had a solid rookie year for the Bengals as he helped them claw their way to the AFC North title. In 2005 he had 98 tackles, 1.5 sacks, 5 interceptions and one TD scored. His being back on the squad will upgrade the Bengals LB spot right away, as well as help the team in stopping the running game, which was a problem a good portion of 2006.