« Dolphins and QB Beck Come to Terms
Vick to be Released by Falcons? » 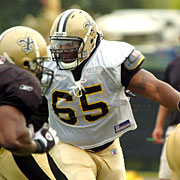 Bentley was cleared by his surgeon to return to the playing field when the team has their first practice on Monday.  The news means that Bentley, who at one point was advised to retire, is close to coming back after a serious career-threatening knee injury.  Today Bentley had a physical New York Giants team physician Dr. Russell Warren,  who had performed two operations on Bentley.  He also helped out LeCharles when the injury was complicated by a staph infection. “I passed it,” Bentley told AP. “I’m good to go.”

The injury and staph infection nearly killed Bentley, and at one point doctors were thinking they may have to amputate his leg.  Bentley said he will go back to Arizona, where he has been the last few months rehabbing his injury. He will be back in Cleveland on Thursday to report for training camp.  He will also have to pass a team physical before he can take the field with his teammates on Monday. “That really doesn’t matter to me,” Bentley said. “The top doctor in the field has told me that I’m OK. I’ve just got to keep making progress.

Having Bentley back on the field on even just on the sidelines is a huge boost to the Browns, who signed the local product to a $36 million dollar contract in March of 2006.
His first season ended in disaster, when on the first play of contact in training camp he tore the patellar tendon in his left knee.  He underwent four operations after injuring the knee. The first was to repair the torn tendon and the other three were to fix damage caused by the staph infection, which led to a pair of long hospital stays.  If he can make it back on the field and help the Browns, it will give the team a big emotional lift.