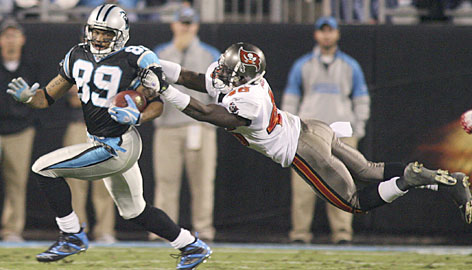 ESPN.comâ€™s Merril Hoge (former Steeler) put together a recent article on the NFLâ€™s Top 10 Playmakers; I will have an agreement or disagreement with him and write about all ten of the playmakers. As you may already have heard, and if you have not listened yet, what are you waiting for? Blake Kelley and I discussed this topic on our weekly podcast show (July 17) “Gridiron Tailgating.” It was an interesting segment and a small part of an exciting show, which turned out really well. We would love to hear your comments on the Top 10 list and look forward to reading â€˜em and arguing back with you! Today we’ll go back and forth on the 1st through 4th rankings, as yesterday we looked at 5-10.

LaDainian Tomlinson Chargers RB: AGREE – Tomlinson is a no-brainer, as easy as it gets, selecting LT at #1 is the right choice. In 2006, Tomlinson had a record-setting year, running the ball to the house a total of 28 times! He averaged over 110 rush yards per game (close to 145 yards per game total) on 5.2 yards per carry, over 2300 all-purpose yards, scored at least twice, in all but five contests, and exceeded the century mark running in 10 of his games. He is a remarkable athlete and plays the game of football with a passion. Coming out of Texas Christian, this fifth overall selection made more trips to the end zone en route to the most highlight reels, they couldâ€™ve dedicated a whole showâ€™s worth of spectacular plays, but SportsCenter wouldâ€™ve ran out of time and film. Tomlinson had more rushing touchdowns then all of the NFL teams by himself!

Steve Smith Panthers WR: DISAGREE – Smith is one the better wideouts in the league but as a receiver he only caught the ball 83 times. A WR has be put up excellent numbers to be considered a Top 10 playmaker in the NFL. Smith averaged only 14 yards per catch, not too astounding if you ask me, and put up less than 85 yards a game. He had only a single game with more than one TD and reached 100 yards a measly four times. Only one time he had double-digit receptions and I would replace him with QB Vince Young. Vince Young was “The Offense” last season for the Tennessee Titans and they relied on him heavily. Young put up everything for the Titans once he stepped on the field and accounted for most of the points and yards they gained. The Tennessee “Youngs” made sure #10 was worth all the hype he received. He is a great runner (almost 7 yards per rush) and can run you over or make you miss with seven touchdowns in â€™06. He is a defensive coordinator, linebacker, and defensive backâ€™s nightmare all at that the same time. Young single-handedly almost put the Titans into the Playoffs, pulling off six straight wins, including two vs. Indy and Philly, leading to an 8-8 record. Young can finish with his scrambling legs, maneuvering with his speed ability via ground or he can air it out and take care of the defense passing for a touchdown via the aerial attack. If you take him out of the offense, the team would suffer greatly, and you can him make a case for him as he does more for his team than anyone in the league.

Dwight Freeney Colts DE: DISAGREE – As much as love to watch Freeney play and motor by every offensive lineman in the league with his vicious spin moves, he can take himself out of the play too many times. His speed is his greatest asset and weakness, as he sacks the QB or overruns a running play. Freeney last season put up only six sacks and is getting paid now $12 million for each sack! Julius Peppers, who I will talk about later in the article, is a much better all-around defensive end and Freeneyâ€™s play has dropped off and he is left out of the Top 10. You can put him in the Top 12 or 15, but there are too many other playmakers that do more than he does on the gridiron for their respective team. Freeney is like lightning in a bottle, though sometimes he strikes through as the play goes right by him. My choice to replace him will be Bears Middle LB Brian Urlacher. Urlacher can take over a game, as shown Monday Nite at Arizona, where he had 19 tackles and was everywhere on the field, during the most crucial moments of a game he can strip the ball, like he took it away from Edgerrin James, leading to a touchdown return, helping the Bears come from behind for a 24-23 victory. He is the best LB on the best defense in the league. Urlacher goes to the Pro-Bowl every year and can intercept passes, range out to cover receivers, tackle the ball carrier, and sack the QB if he wants to. He can do all that is asked of him and his size (6-foot 4 260 pounds) and speed (4.5 40, keeps up with anyone) puts him in position to make plays at the highest level, during the most pressured situation at anytime in the game.

Peyton Manning Colts QB: AGREE – This one was way too easy and I will agree with Merril on this one. Manning simply is the most gifted passer and knows the game inside and out. He can audible to any play whenever to put his team in the best position, while the defense does not know whatâ€™s going on, and he can play those mind games with the opposing defensive coordinator and players on the field. Manning has a tremendously accurate arm, completing at least 65% of his passes every year and his arm strength is one the best in the league. Heâ€™s always a leader in the MVP race and you can guarantee that he will throw for over 4,000 yards with 30 touchdowns, as much as you can guarantee that the Colts play their home games inside a dome.