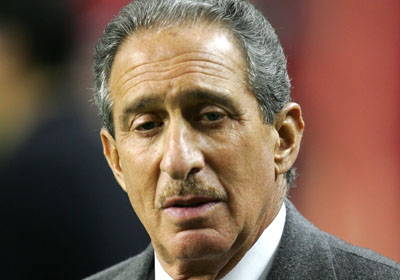 As the Atlanta Falcons continue to deal with the indictment charges against starting QB Michael Vick, the teams owner has made his first comments after learning of the charges. Arthur Blank, who may be the biggest Vick fan of all-time, returned from an overseas trip Wednesday and said that he is “saddened and distressed” about the charges against Vick. Blank made a statement about the situation that reads as follows:

“This is an emotionally charged and complicated matter,” Blank’s statement said. “There are a wide range of interests and legal issues that need to be carefully considered as we move ahead, including our need to respect the due process that Michael is entitled to. Also, this situation affects everyone on our club, our players and associates, our sponsors, our fans and the Atlanta community among them, so we must consider all of our customers in making any decisions.

“Given the differing perspectives and strong feelings around this issue, we probably won’t make everyone happy, but we are committed to doing the right thing. As the owner of this club, that’s ultimately my responsibility. In the meantime, know that I’m saddened and distressed about this not for myself, but for our fans and community who have been so loyal to us. We will do our very best to continue to earn your support.”

The Falcons have not made any decisions about if Vick should sit or not as the team gets ready next week to start training camp, but many fans, including many here on NFLGridironGab feel that the QB should be suspended by the league and/or the Falcons. It appears as of now that both the league and Atlanta will sit back and wait to see what happens next before handing down any ruling about allowing Vick to play. The QB took a hit with one of his endorsement deals on Thursday, as Nike announced they would not be releasing Vick’s newest show – the Air Zoom Vick V.

As for Blank, what to do with Vick may be one of the hardest decisions the owner has ever had to make. Blank for years has looked at Vick almost like a son, and doing something like suspending him or even releasing him would be heartbreaking for the owner. In the end, it may be the only the thing Blank can do to save face for his franchise, which is sure to take a hit with those that want Vick to be forced to sit, and as the continued facts of the case come out, Blank has to look at the long term effects of keeping Vick around.