What’s the Latest With The Chiefs and Larry Johnson? 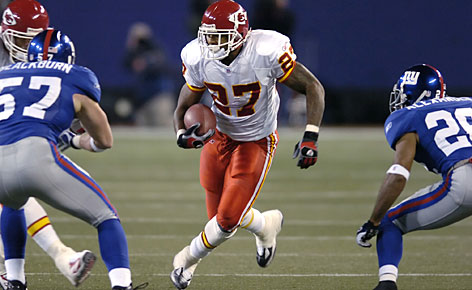 As training camp approaches for the entire league, one of the bigger questions out there is what is going through the mind of Chiefs running back Larry Johnson.  There’s been so much talk about Johnson holding out once the Chiefs start camp, and now a few of the experts from the league is giving their points of what will happen with Johnson once the Chiefs report.

One expert is NFL Network talker Adam Schefter, who recently stated the following about Johnson and his contract status: “I believe that we will not see Larry Johnson in KC until he has a new contract. He will not be there under the existing terms of the contract. He’s made too much noise, it’s too important to him, there is too much money going around at that position.” Would they trade Johnson? “No matter what they said, they were floating his name around the league. If they could have gotten a one, two, and a three, they would have dealt him.”

Strong words about one of the best backs in the league.  So the question now is – are the Chiefs indeed looking to move Johnson?  John Clayton of ESPN reports in his blog today that the two sides are “taking a week off from talks.”  Johnson is under a deal that will pay him $1.9 mil this season, but he is sorely underpaid by NFL standards for today’s top players.  Clayton says that Johnson “needs to get a deal done.  He’s going to turn 28 this fall and it’s hard for running backs to net big contracts at that age. He can’t let the season slip away and then get franchised. It’s pretty clear Johnson will hold out if nothing gets done and he’s stuck with a $1.9 million salary this season.”

Last season L.J. ran for 1,789 yards, 17 TD’ s but needed a whopping 416 attempts to do it.  Johnson also caught 41 passes for 410 yards.  The Chiefs are going to be in a BIG hole if Johnson is not there for camp or for opening day come September 9th.  My thought is that Johnson gets a huge deal, and that the Cheifs, L.J. and his agent all know that this thing needs to get done – fast.