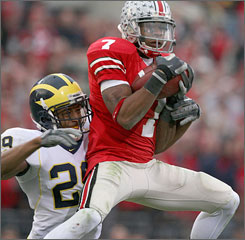 Former Ohio State Buckeye pass catcher Ted Ginn Jr. is going to do more than just challenge for the Dolphins #3 WR spot with Derek Hagan (who?) There is no way Miami would spend such a high pick on Ginn to see him watch from the sidelines in ’07. He has a strong enough chance to reach the pay dirt more than any other Miami positioned player. Ginn is already the fastest player on the Miami roster (sorry Chris Chambers and Will Allen) and he will bring a game-changing dimension to this lackluster offense. Many might say he is too light at 180 pounds, not an experienced-enough WR, or his hands are not so good, but I say Ginn will be Rookie of the Year in ’08.

It’s a bold prediction considering they might only use him exclusively as a return specialist, a la Devin Hester, therefore the experts will overlook him when putting in their “ROY” votes. Calvin Johnson was the top-rated WR in the NFL Draft this past April, having said to have no “real” weaknesses or flaws to his game. Everyone is saying he is without a doubt the best Rookie player. Johnson is the physical specimen at six-foot five, 240 pounds, but will he be able to adjust to the better CB’s in the NFL, let alone the NFC North Division corners (Nate Vasher, Charles Tillman, Antoine Winfield, and Al Harris?) Ted Ginn plays at a speed that is rare for receivers, unless your name is Reggie Bush. Defensive backs will see the back of his jersey a lot this season. Ginn Jr. is my pick for ROY because he has not even reached his full talent level and he has a veteran QB in Trent Green throwing him the football (spreads the ball around – K.C.)

It’s laughable to even consider him not in the slot position, game in and game out, making an impact on the gridiron. Defensive coordinators will have their hands full with Ginn and Miami WR’s Chris Chambers and Marty Booker. The “Phins” will have four, maybe five options if you count rookie FSU Seminole speedster Lorenzo Booker at RB, to go to on offense. With Ronnie Brown coming back healthy and the offensive linemen getting better, Ginn will be freed up often for big plays deep more times than not. Expect Ginn to prove all the critics/nay-sayers wrong, who though QB Brady Quinn should’ve been selected at #9. Watching him at OSU plenty of times, I know not to underestimate a hard-worker like Ted Ginn Jr. He has moved from QB in High School, to CB, now to WR (the past three seasons.)

He burned defensive backs regularly with his unbelievable speed and improved his route running and catching in college. He can be used for screens, reverses, and quick slant routes, not to mention the deep ball. I envision Ginn having a Reggie Bush or Devin Hester type-season, appearing in the end zone on Sundays for more than just pre-game drills. He will give Miami 8-10 touchdowns and an abundance of yards after the catch, “YAC.”AFC Coaches and signal callers around the league better pay close attention to Green’s weapon.

Cam Cameron’s pass calls to Ginn will get Dolphin fans out of their seats every time touches the ball. He is known to leave defenders helplessly on the ground, showcasing his make-you-miss skills. This elusive, fun to watch WR will be out in the open field more then a bunch of farm animals. He will put on the jets more then a top pilot this season. During the year you will see, “Ginn challenges for #1 WR position,” rather than competing for the #3 WR! â€˜Backs will hear him go by as they whiff for air in attempt to stop the “Buckeye Blazer.”