Chargers RB Turner Off the Board Says GM Smith 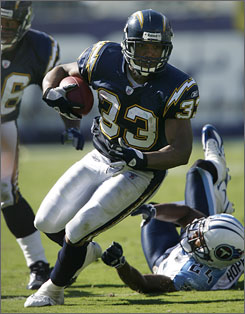 according to Chargers GM A.J. Smith.  Quoted in Sunday’s Boston Globe, the backup to LaDainian Tomlinson is going to stay with San Diego, at lest for one more season.  “No, we’re done,” he fired back last week. “A lot of people don’t believe me. It was hot and heavy there for a while, there’s no question about it, but we made the decision that we’re taking him off the market through October. I made it clear that if a team loses a running back during the preseason or in September or October, do not call the Chargers about Michael Turner. I wanted our mind-set to be clear: He’s a member of the Chargers as a kickoff returner and backup to LT.”

Turner entered the offseason as a restricted free agent, and did have some feelers from other teams, but no move was ever made with him.  Last season Turner proved his worth in place of the MVP of the League, rushing for 502 yards on 80 carries.  Smith says it’s more important now to get ready for 2007, not fool around with possible trades and a roster move like getting rid of Turner.  “I don’t want to fool around on a day-to-day basis,” he said. “If someone met the demands before, we got together as an organization and said we would be willing to get a couple of draft picks and not have the services of Michael Turner. The price was high, but it didn’t work out. Now we’re not turning back.”

You can bet that once Turner hits the open market, he will be in high demand by just about every team in the league that wants/needs a quality running back.  For now though, if L.T. should happen to suddenly get hurt or needs a breather, the Chargers know they have a back that can come in and do the job.