Dolphins Taylor Speaks Out In Latest Issue of Sports Illustrated 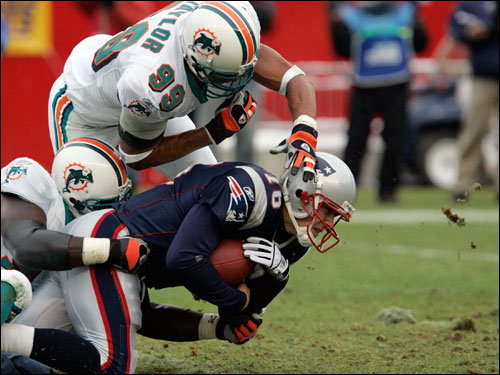 The NFL Defensive Player of the Year – the Dolphins Jason Taylor, is speaking out this week in the latest Sports Illustrated.  Among the topics covered in the article includes the fact that Taylor and his wife, Katina, had divorice papers ready to go not once, but twice last year.  Taylor’s wife says that her husband almost quit the game last year in order to get their marriage back in order.  “It’s ironic that he had his greatest season after talking about quitting just before it started,” Katina Taylor told S.I. “He told me he was willing to give up his sport for his family, to get things straightened out. My response was that quitting football wouldn’t be the answer.”

Taylor also spoke out in the article about new starting quarterback Trent Green, who comes to the Dolphins after a long offseason of trying to work out a deal with the Chiefs.  The deal was finally reached just a few weeks ago.  “This is off the record – oh, what the hell, it’s on the record: He’d better not get hit. One big hit, and he could be scrambled eggs. – Taylor said this about a week before Green came to the Fins.

On former coach Nick Saban, who left the team to go back to the college ranks: “I loved Nick; I thought he was great. He rubbed a lot of people the wrong way, but I was his kind of guy. Yeah, his decision was selfishly based, but at the end of the day, isn’t everybody going to take the best job that’s available? … I don’t want to get too political, but we’re in a war based on false pretenses.We have problems in this nation with health care and affordable housing, and how many politicians have lied about that? And people want to freak out because Nick Saban wouldn’t coach a football team?”