McCareins Gets Props From Mangini at Recent Camp 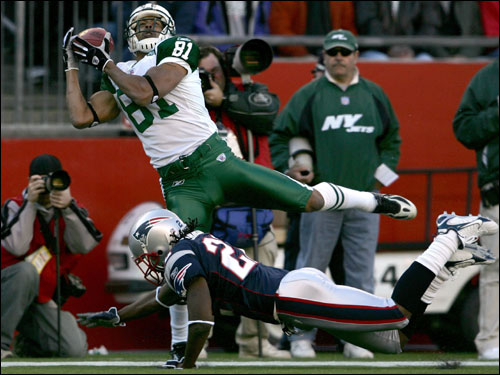 Could wide out Justin McCareins stick around with the New York Jets? That’s the question this offseason, as the Jets recently held a minicamp and head coach Eric Mangini spoke highly of the number three receiver. Last season it looked for sure as if McCareins would be gone, as he was pushed to the number three role and considering his salary, he was a lock to be cut.

Now, he himself is not so sure that is going to happen. “I guess I’m here, and it seems like I’m getting some good reps,” McCareins said to The Journal News. “I’m a part of the offense, it seems like. I feel like I’m part of the group.” McCareins was a player that was rumored to possibly be on the trading block as well, with one team that sorely needs wide outs – the Titans, taking a look at him.

He is still set to make $3.9 mil this season, so being around after the cuts is not a sure thing, considering the fact as well the team has to still sign their draft choices. But being hailed as an “offensive standout” by your coach and being involved is a good step in the right direction for McCareins.