« Culpepper Injures Hand in Two-Vehicle Crash
Kendall Wants Out With the Jets; Team not Giving In »

Champion Colts Get Their Rings

The blue horseshoe. The Lombardi Trophy in the middle of 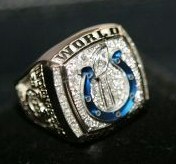 the Colts’ logo.  Even a red ruby to represent the figurative blood shed by the Colts over the course of the season.  And, of course, the Super Bowl rings were all handed out Wednesday night on â€” what else? â€” a silver platter.  The response to the shiny, new, $5,000 rings was unanimously exuberant. “I know they normally say that diamonds are a woman’s best friend, but tonight, they’re a man’s best friend, too,” Pro Bowl receiver Reggie Wayne said.  Three-time Pro Bowl defensive end Dwight Freeney said the design, courtesy of team owner Jim Irsay and his wife, was precisely what he envisioned.  But it was the private ceremony that really brought out emotions.  All the Colts players and coaches from the Super Bowl team attended the ceremony but defensive tackle Montae Reagor, who is expected to practice with Philadelphia tomorrow.

When they left the downtown theater’s ballroom, players were so excited they didn’t know what to do.  Players names are etched on one side of the ring, with last season’s motto “Our Time” and the word “faith” etched into the other side.  Irsay said he wanted the word “faith” because it represented the religious feelings of the team and the tragedies the Colts overcame, such as the suicide of head coach Tony Dungy’s son and the traffic accident that killed receiver Reggie Wayne’s older brother.  Conspicuously missing from the ring were the diamonds that teams typically use to symbolize the number of championships won by the franchise.  In the Colts case that would be two, counting their 1970 victory when the team was still in Baltimore. However, Irsay opted against that for two reasons.  “We look at it as being the first one for the Indianapolis Colts,” Irsay said. “And there was no need to bring up any friction.”  Irsay’s father, Robert, moved the team from Baltimore to Indianapolis in the middle of the night in 1984 and some Baltimore fans still haven’t forgiven the Colts for leaving.

Super Bowl MVP Peyton Manning kept a low profile after picking up the one personal trophy that eluded him through his first eight seasons in the NFL.  “It only gives you about a month and a half to wear it because then next season starts,” Manning said last week.  “I think you really can’t wear it after that or you’re just sort of hanging onto last season.”   “It’s a special moment because it doesn’t happen every day,” Dungy said last week.  “It’s been almost 30 years between mine.  To me, it’s really more symbolic of the guys starting in March and saying ‘This is our goal’ and then accomplishing it.  Not everyone does that.”Dungy won his only other Super Bowl ring with the Pittsburgh Steelers in 1978.  The team’s quest for a Super Bowl repeat has already begun.  The Colts are wrapping up their fourth week of mini-camp tomorrow, and veterans don’t have to report again until training camp opens on July 29.