« Stalemate Continues Between Culpepper and Dolphins
Was Moss Close to Going to the 49’ers? »

The best news is that he didn’t get hurt. The somewhat surprising news – he won. Yes, Bengals wide out 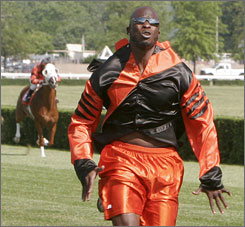 Chad Johnson on Saturday not only raced – but beat a horse during a charity event in Cincinnati. Johnson, who went up against a horse named “Restore the Roar,” won the race by several lengths at River Downs in front of about 8,000 fans.

Johnson, never one to take a back seat to showboating, was quite boastful after the race. “Floyd Merriweather, you’re next,” Johnson yelled. “I want to fight you. I’d like to take Kobe and LeBron one-on-one. Jeff Gordon, we can take a couple laps.” C.J. may have had a little revenge in mind for the Bengals, as 14 years ago, Bengals wide out Chris Collinsworth lost a similar race to the same jockey that rode the horse Johnson beat on Saturday.

The current Bengals receiver took the win in stride, and even took a ride on the horse that he beat. He did say that he might be back at River Downs later in the summer to race again. No doubt that DB’s had better beware that if Johnson can topple a horse, then they may be next once the 2007 season starts.