Samuel a No-Show as Pats Open up Mini-Camp 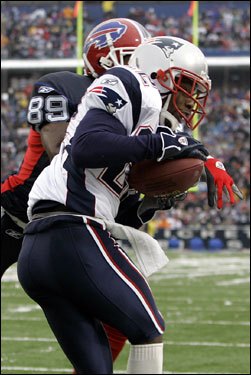 While the New England Patriots have had what many believe is the best offseason in pro football, things may get a bit hairy as mini-camp kicks off today in Foxboro. The Boston Herald is reporting that cornerback Asante Samuel will not be on the practice field today with his team, upset over the fact that he has not gotten a new deal. Samuel’s agent confirmed that his client will not be with the team today. “He’s not coming to camp until a contract resolution can be reached,” Alonzo Shavers told the paper. “Nothing more can be said. His status has not changed, there has been no movement towards a deal.”

Samuel has been offered a one-year franchise tag that would pay him $7.79 million, but he has declined to sign that offer. He has until July 15th to sign the deal unless a new deal can be reached, or he will hold out. A source tells the Herald that Samuel is willing to sit out the season unless a new contract can be reached. Sounds like last season when Pats wide receiver Deion Branch was in almost the same situation. That ended with Branch and the Pats trading nasty barbs until the receiver got his wish and was traded to the Seattle Seahawks. Surely the Pats want to avoid another situation like that.

The corner told the NFL Network in April that he was not happy with his team and their lack of coming up with what he feels is a fair offer. “We have a difference of opinion in my value,” an angry Samuel said at the time. They think I’m worth one price and the other teams think I’m worth a lot more. If a long-term deal can’t be done at fair numbers for me and New England, then I want to be traded.” Samuel took his game to the next level last season, with 12 picks and he became known around the league as one of the best shutdown corners. What he is worth is now in the hands of the Pats, and right now, it looks as if the sides are not close to coming to a new deal.