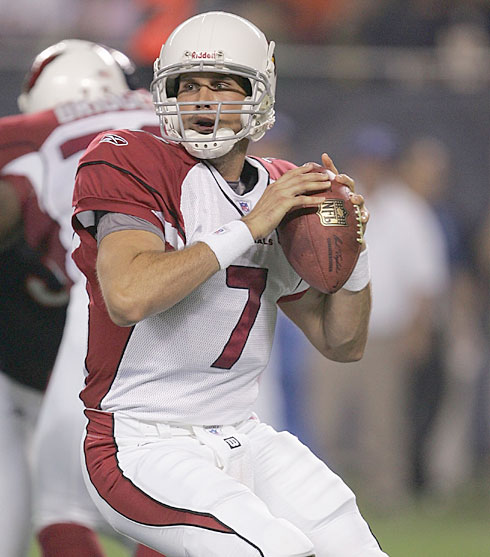 The general mood among most Arizona Cardinals fans this off season can best be described as tentative anticipation.  After the emergence of Matt Leinart last season and the Monday night debacle against Chicago, that is probably reasonable.  The Cardinals are a very talented team offensively, but have a very young,  yet potentially good, defensive squad.  While Chike Okeafor and Antrel Rolle are proven leaders, the rest are somewhat unknown factors.  They are all players drafted from reputable colleges with solid football programs, but still relatively young and inexperienced.  They’re missing that big defensive playmaker like a Brian Urlacher or Champ Bailey.  On special teams, K Neil Rackers led the team in scoring but is coming off a fairly average 2006 after leading the league in points and FGâ€˜s made in â€˜05 and RB J.J. Arrington is a legitimate return threat.   It is this defensive question mark that has me thinking like most Cardinals fans.

Considering their schedule, if they can beat the teams they should and at least split the games with Seattle, the division winner a year ago, it is quite possible they could contend for the division or at the least, gain a wildcard spot.  Also, there’s the additional motivation of the Super Bowl being held there at the end of the season, making it even slightly possible they could be the first team in the modern era to actually host the Super Bowl.  Don’t get me wrong, I know that’s quite a long shot, but in today’s NFL, and with what is still considered a wide-open NFC division, not entirely out of the realm of possibility.

Edgerrin James is still quite capable of achieving another 1,000 yards rushing, and with the explosive WR tandem of Boldin and Fitzgerald, things are looking up for the Cards.  First year coach Ken Whisenhunt might just be the missing ingredient if you look at what Sean Payton did for the Saints in his first year.  The only other question mark at the present, would be the usual injury problem that could throw an otherwise promising season into disarray, but that’s a universally unforeseeable problem.

I am a bit disappointed that there isn’t a Cowboys-Cardinals game in the regular season this year because it’s always an extremely fun game to watch and a great rivalry, but who knows, perhaps they’ll meet in the postseason.  Whatever happens, the Cardinals should improve on last year’s 5-11 mark.